Once again we are in the midst of a political season.  In just over 30 days Americans all over the country will go to polls to vote.  There will be elections for governors, mayors, city councilman, senators, and members of the house of representatives.  Many Christians will take part in these elections, both as voters and candidates.  As I prepare to go to the polls myself I and pondering a thought-provoking question.  What political ideology is best for the full practice of religious faith?

In the United States, we have a two-party system, in asking this question, what political ideology is best for the full practice of religious faith, I am not asking which party is best for the full practice religious faith.  That question goes much deeper than party affiliation.  After doing quite a bit of research I think I can answer the question as to what political ideology is best.  One of the first things that I should point out is that we are talking about political ideologies and not economic systems, therefore; we will not be talking about the issues of socialism or capitalism.  We will be examining political ideologies which currently have some prominence within the United States.  We will be examining progressivism, classical liberalism, conservatism, and libertarianism.  After examining each of these political ideologies and looking at where they fit into the American political system will then determine which ideology would allow for the best ability for people to fully practice their faith.

The first political ideology that we will examine is progressivism.  The word progress is in the name, so one would assume that progressivism is a good thing.  When we look at the history of the ideology and what it stands for today we find that much of progressivism came directly out of the church during the social gospel movement. The social gospel stated that Christians should apply Christian teachings to solve societal problems.  Many of the most prominent and historical events within the progressive movement would not have been possible without the presence of strong Christian values and moral authority as well a strong input from other religious organizations.  At its root that the progressive movement stood for equality, fighting corruption in both the private and public sector, and protecting the environment.

Today the progressives represent the far left wing of the Democrat party.  The issues of equality, fighting corruption and protecting the environment are still central to the movement. Today important issues for progressives also include fighting income inequality through methods such as tax reform, reforming Wall Street by placing stronger regulations on financial institutions, reforming health care through laws such as Medicare for all, and increasing the federal minimum wage.

Progressives are very comfortable with using the power of government to move their agenda forward, therefore; progressives tend to promote and support big government.  In terms of faith, the religious influence on the progress of movement has waned.  In fact, many progressives have shown an anti-religious sentiment.  The progressive view of equality means that everyone must be treated the same in all circumstances.  This does not allow a lot of room for religious conviction within the public sector, therefore; religious freedom is seen as something that needs to be curtailed, for the sake of the collective.

People who would fall into the progressive camp would be:

Classical liberalism was the main political ideology for most of the 19 century into the beginning of the 20th century.   Classical liberals saw utility and pragmatism as foundational to public policies. Utilitarianism inspired wide-ranging reforms, but it also leads to laissez-faire or nonrestrictive economic policy, however; some economists did advocate for state support of public works and education.

Classical liberals agreed with Thomas Hobbes that government had been created by individuals to protect themselves from each other, thus the purpose of government should be to minimize conflict between individuals.   Classical liberals also believed in the profit motive.  People are best motivated by financial incentive, and people should be allowed to act in their own self-interest.

Classical liberals believed the government should be no larger than it needed to be to fulfill its obligations to the people.  The role of government was as follows:

Now let’s talk about conservatism. Conservatives promote tradition, economic responsibility, organic society, property rights, and hierarchy and authority.  They advocate that one should be allowed to pursue personal wealth and own property.  They also support a strong military, small government and states’ rights. They emphasize the importance of independence and self-reliance and tend to resist radical or revolutionary change in favor of slow deliberate, organic change over time.

The beginning of Conservativism is traced to the reaction to the French Revolution in the late 18th century.  Edmund Burke is considered one of the primary founders of western Conservatism. He argued against the French Revolution, and it turns away from many institutions.  Burke argued that there was inherited value to institutions and customs, including the development of the state.  For Burke, it was important that one understand that the state was not an institution that came into being overnight, but it was built on the wisdom of many generations.  He also saw the family and the Church as important institutions in society.

Libertarianism is a political philosophy that upholds liberty as its core principle. Libertarians seek to maximize political freedom and autonomy, emphasizing freedom of choice, voluntary association, and individual judgment. They are skeptical of authority and oppose any government interference into their personal, family, and business decisions. They believe people should be free to live their lives and pursue their interests as they see fit as long as they do not harm others.  Libertarians seek to see a reduction in the national debt, and less U.S. intervention overseas

In the United States, the Libertarian Party has stated that:

There are Pros and Cons to each of these political philosophies.  We will address what they are, but before we do I think that it is important to be transparent about where I stand.  I have a strong Christian faith. In terms of my faith, I am religiously conservative.  In terms of my political views, my 8 values results rates me as a centrist and my political compass results would seem to agree.  It puts me in the upper right corner of the left-libertarian quadrant near the center. 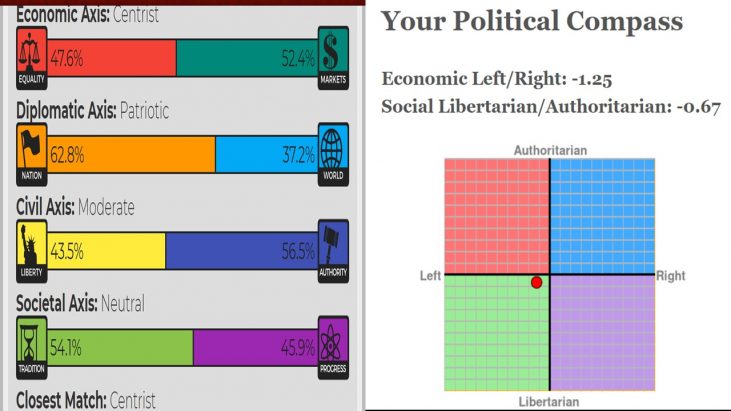 My political beliefs tend to lean more toward the classical liberal although I am a social libertarian.  I favor small government, a strong national defense, and a regulated market economy.  I think that government is more accountable the closer it is to the people and so I favor as much local control as possible.  I do support the separation of church and state, however; I think that the free expression of faith can and should be allowed to take place in the public space.  One doesn’t forfeit their religious convictions when they choose to interact in public politicly or within the market.  So were I sand is:

Markets do not automatically formulate themselves into ‘the best possible formation’ when left to their own devices.

Fewer regulations can lead to exploitation of resources and worker.

A competitive market system is not necessarily going to work in the best interest of the people, nation, or the world.

The focus on individual liberties allows for great latitude in the practice of one’s faith.

The focus on separation between church and state can go too far to the point where public displays of faith are not supported or made illegal because of the perceived need of separation.  This can lead to pushing faith practice out of the public sphere.

The focus on individual liberties allows for great latitude in the practice of one’s faith.

The price of the religious liberty is that people of faith will have to be open to accepting many things in society that are in opposition to their faith.

Now we come to the main question for this article, what political ideology is best for the full practice of religious faith.  We have to eliminate two right from the beginning.  Modern progressivism has shown an antagonism to religious faith.  Conservatism while showing support for conservative  Christian values it has not been as supportive of non-Christian faiths with the exception of Judaism. That leaves us with Classical Liberalism and Libertarianism.  In theory, the best political ideology for the full practice of religious faith would be libertarianism.  Libertarians would be totally open to allowing one to practice their religion as they see fit, the trade-off would be that we would also have to accept things such as legalized prostitution and legalized drugs.  As Christians, I think that we could accept this as the price we pay for freedom.  The reason that I say this is because if we do our part to fulfill the great commission, we will be just fine.  What we must do regardless of the political ideology that is prevalent in our society is teach the Word of God.  If we truly teach the Word of God we will find that our religious communities will be strong and we will be able to withstand the onslaught of secular culture.  There will be more healthy marriages, fewer abortions, fewer divorces, and a greater commitment to God and each other. We just need to focus on teaching the Word of God.

You probably noticed that I said that libertarianism would be best in theory.  I said that because do not think that true libertarianism can work in practice.  I think the best ideology in practice would be a hybrid of classical liberalism and libertarianism.  This would allow a great amount of personal freedom but still allow for the government to provide those services that are essential to promoting the general welfare of society.  In this hybrid model, greater personal freedom would still provide for the legalization of things that our faith is opposed to, but that’s ok, it just means that we would have to do a better job of teaching our faith.

Scroll back to top